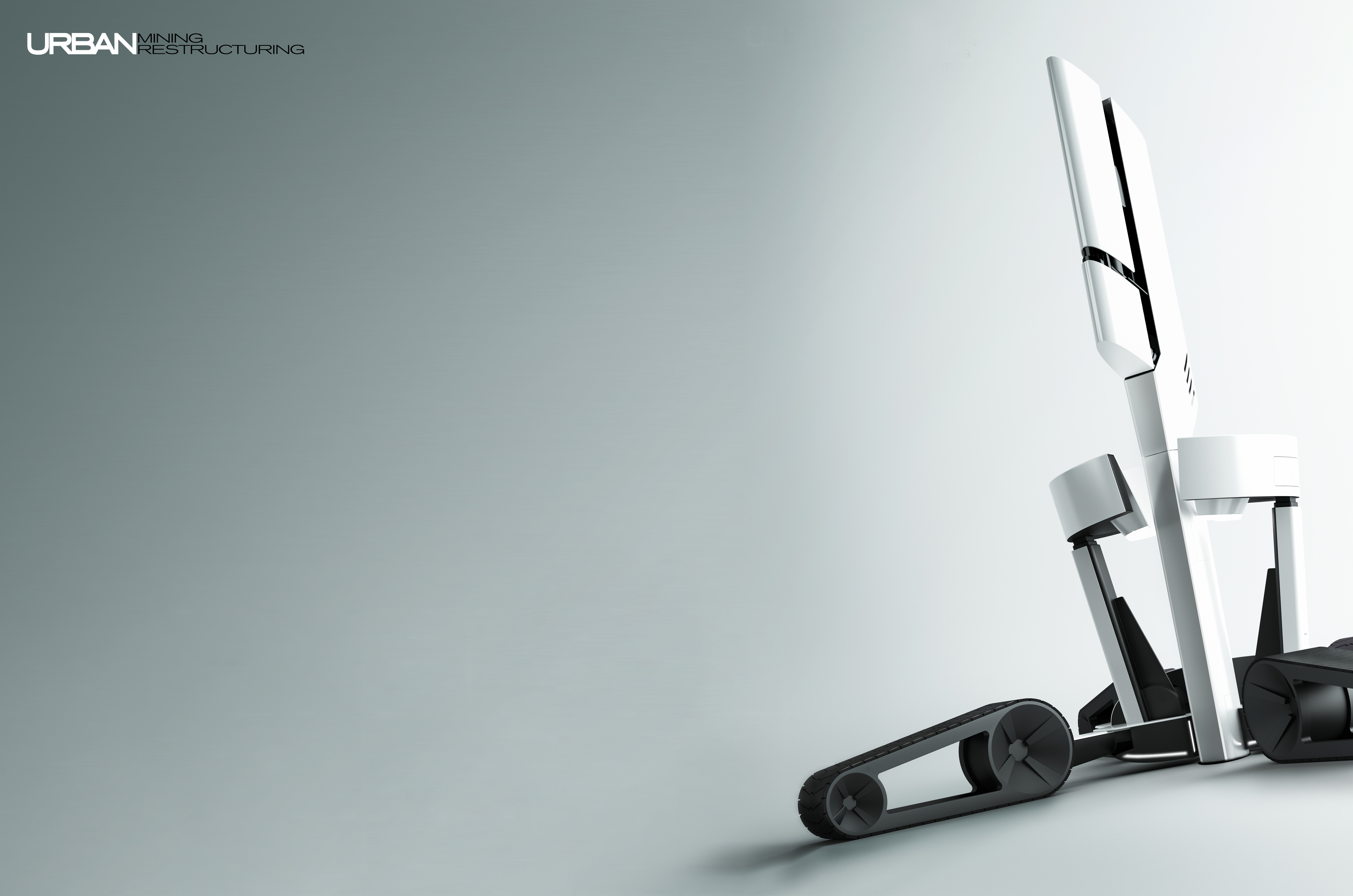 (video now in HD) The human population is growing rapidly. A conclusion is, our cities are spreading and the shortage of raw materials is increasing. The life in the megacities is hardly bearable. Narrowness, traffic, smog and stress are just a few reasons why we have to rethink our cohabitation from a zoomed-out perspective. My project is a concept to make every day life better in a broad sense. It enables to demolish and recycle buildings time- and money-efficient, ecologocally and is not harmful to humans and the environment. Raw materials and space are regained to build more attractive cities. 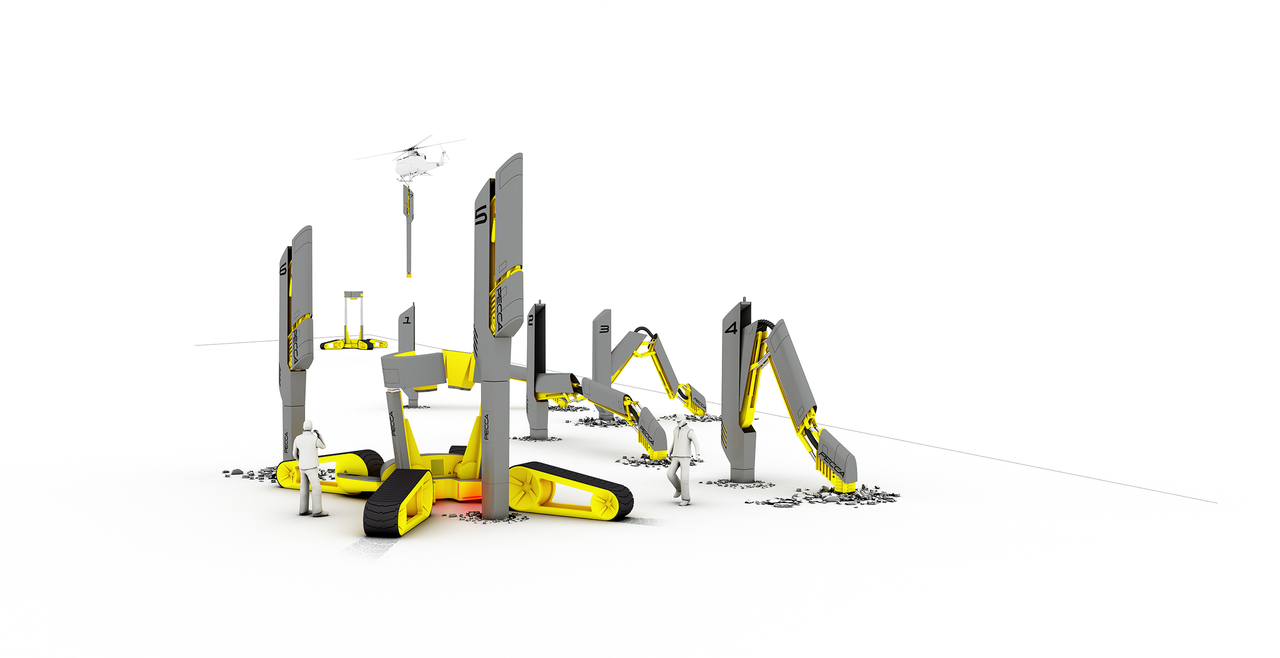 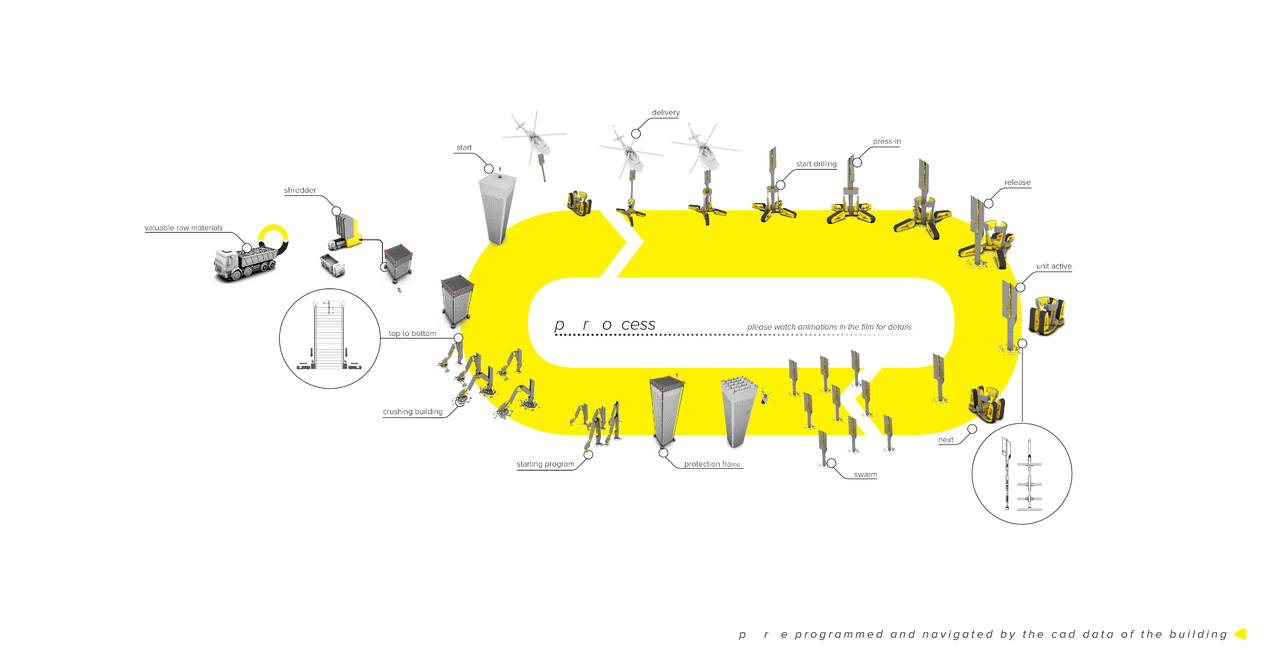 Sometimes big problems can only be solved by taking several steps backwards and changing something drastically. It´s about time to tackle one of todays most urgent problems...space to life and quality of life. In this graphic you can see the development of large cities into so called MEGACITIES. The EU gives this process the description AGGLOMERATION. This facts should give impetus to act. My project seriously addressed this theme and gives pragmatic approach. 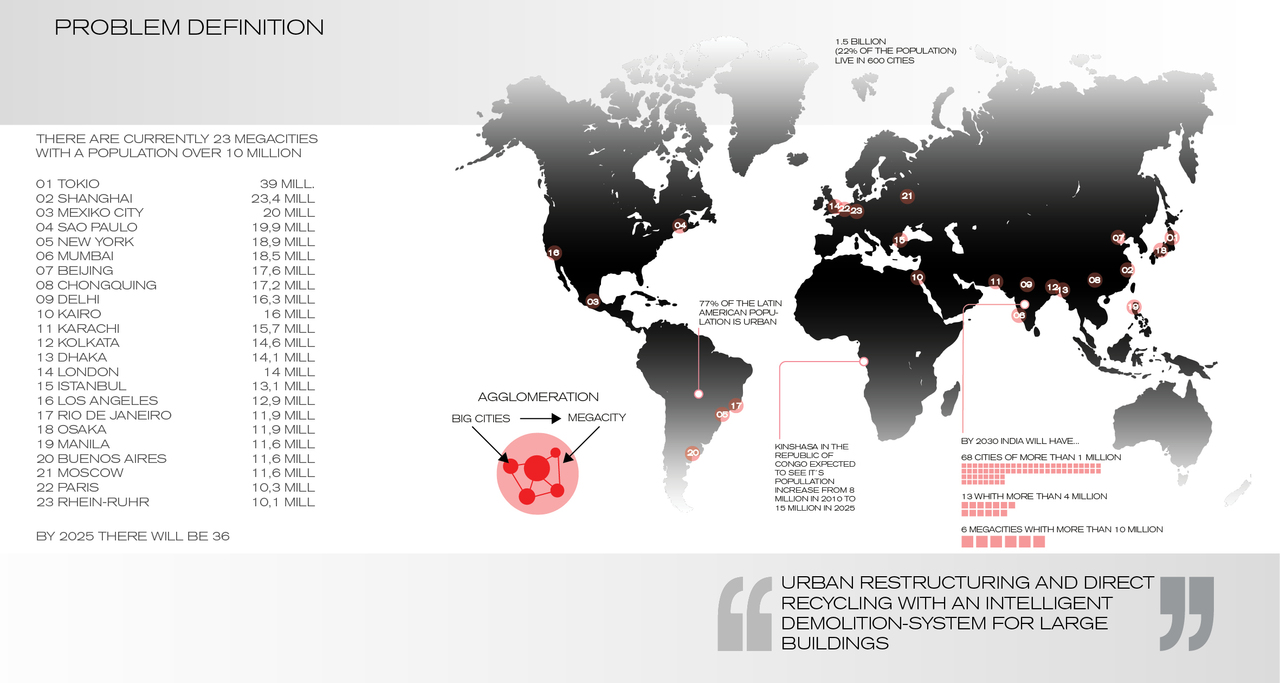 The core of my project is to harvest the buildings of our cities to get raw-materials and new space to create a better place for living. While reserching, it came clear to me, that i don´t only wanted to create a simple new demolishing-machine. I wanted to rethink this topic from an extended persperctive to solve the problem in a broader sense. The main approach are the modern semi-automatic, hydraulically rising form- and frameworks, which were used to build the Burj Khalifa. Machines wich are installed on the rooftop of a building are crushing this while going continuously and vertically down to the ground like a worm with a drilling-head and a jackhammer on the tail. The idea of the building-cutter was born. 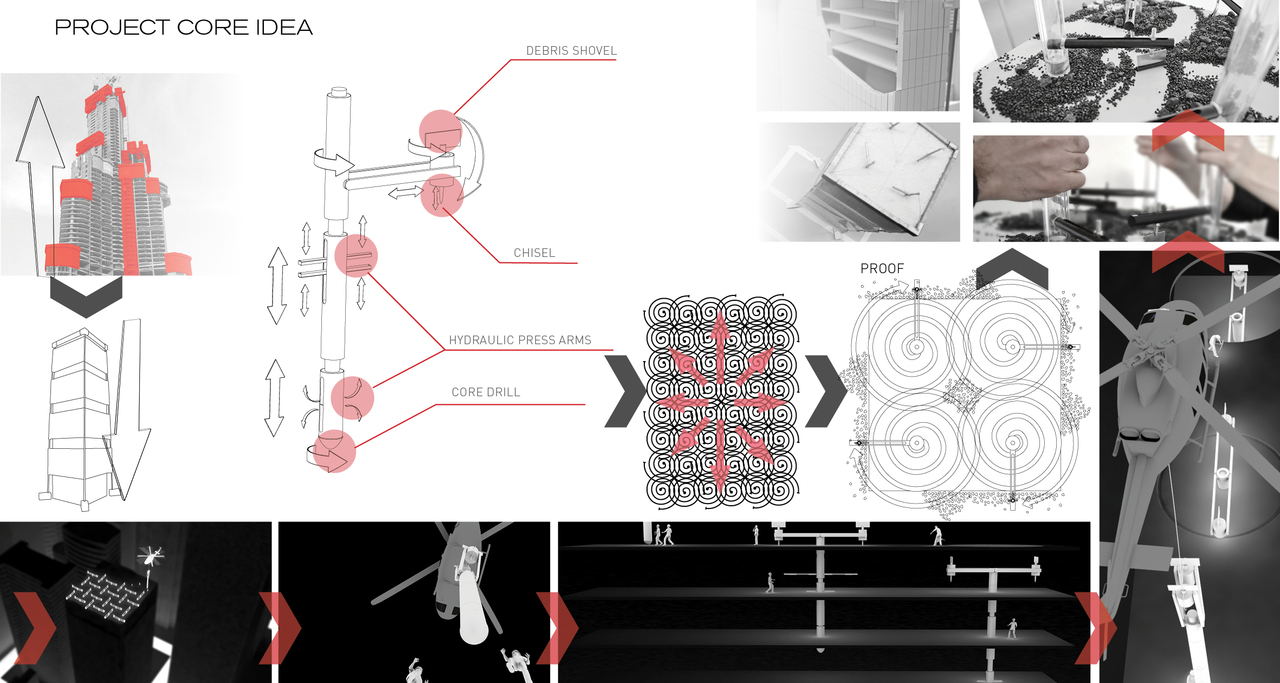 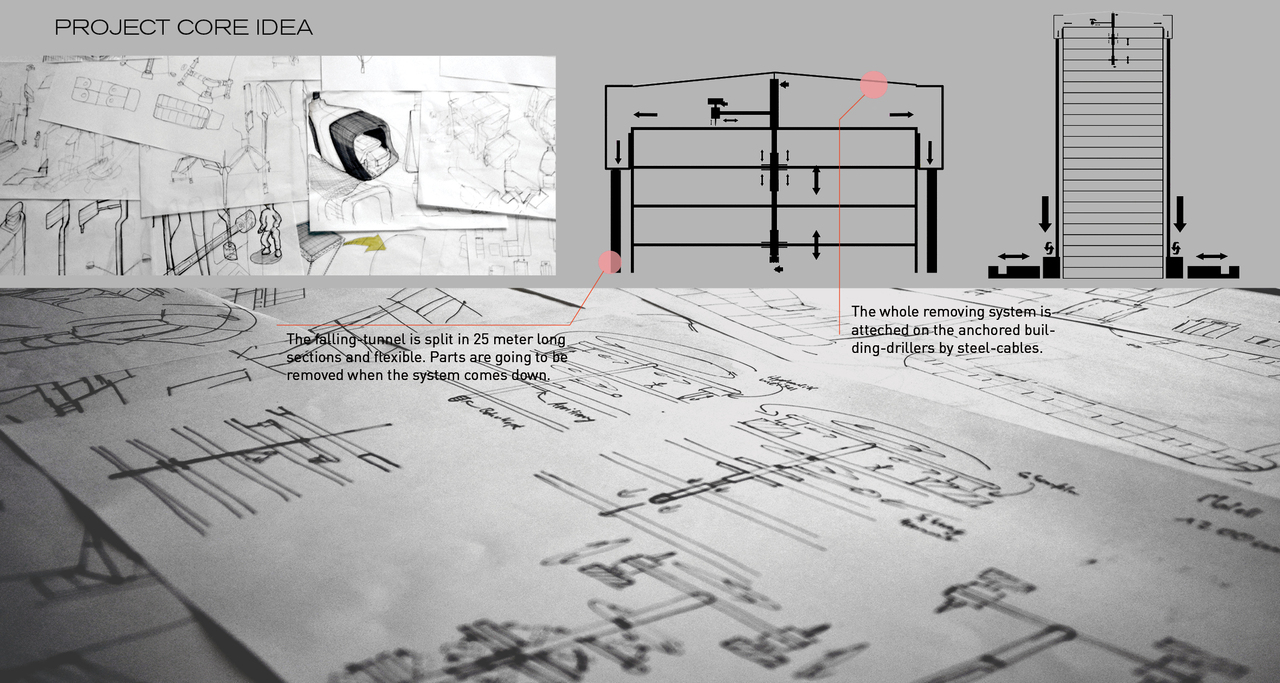 This building-cutter drills a hole into the roof, which has a bigger radius than the body at its widest part. Now the machine is let down into the building. The same procedure whith the next floor. It takes about five houres to drill a hole into a standard reinforced concrete ceiling. After the machine slips through roof and next floor, it anchors itselfs into the building by force-fitting the floors between its hydraulic press-arms. Now the lowest part extends hydraulically down to the next floor and starts to drill. After that, it goes through the hole and anchors itself with its press-arms. At this point the upper part is done with work, means the floor is crushed and cleaned-up. The middle part releases the anchored ceiling and moves on to next floor to anchor there. The upper part follows. This is a rough describtion of my principle of the vertical locomotion. (please note the animation for details) 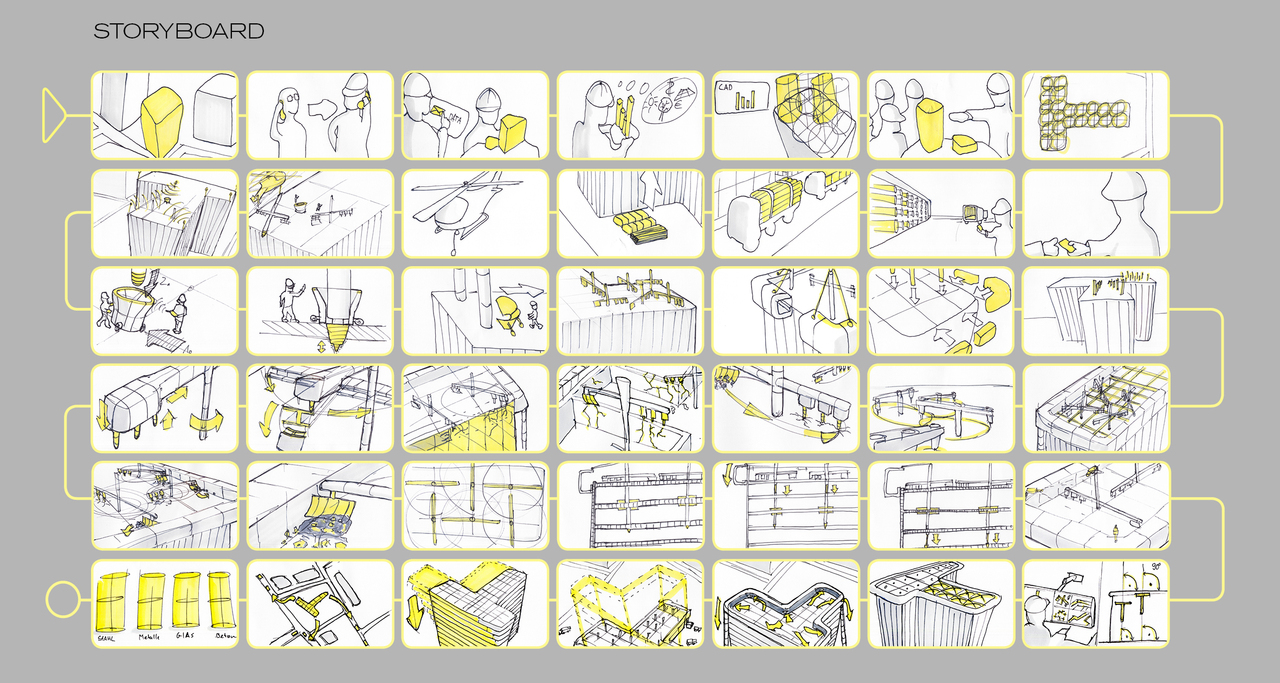 A condition to my project is the fact, that everything is mapped by CAD-data today. Especially cities and buildings. So the engineers can plan and preprogramme the demolition of the building exactly. It is previously known to the engineers which materials the building-cutters have to crush on their way down and how much raw-materials they get by tearing off a building. (please note the animation from 04:00 minute on for detail) 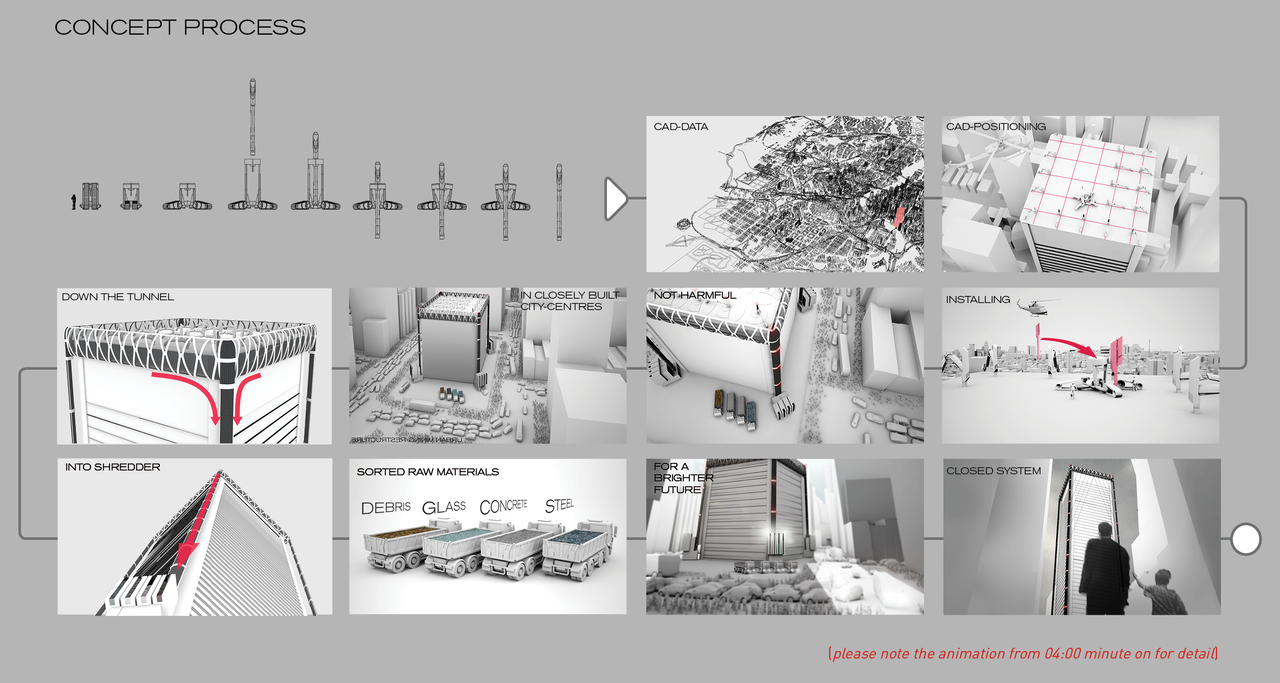 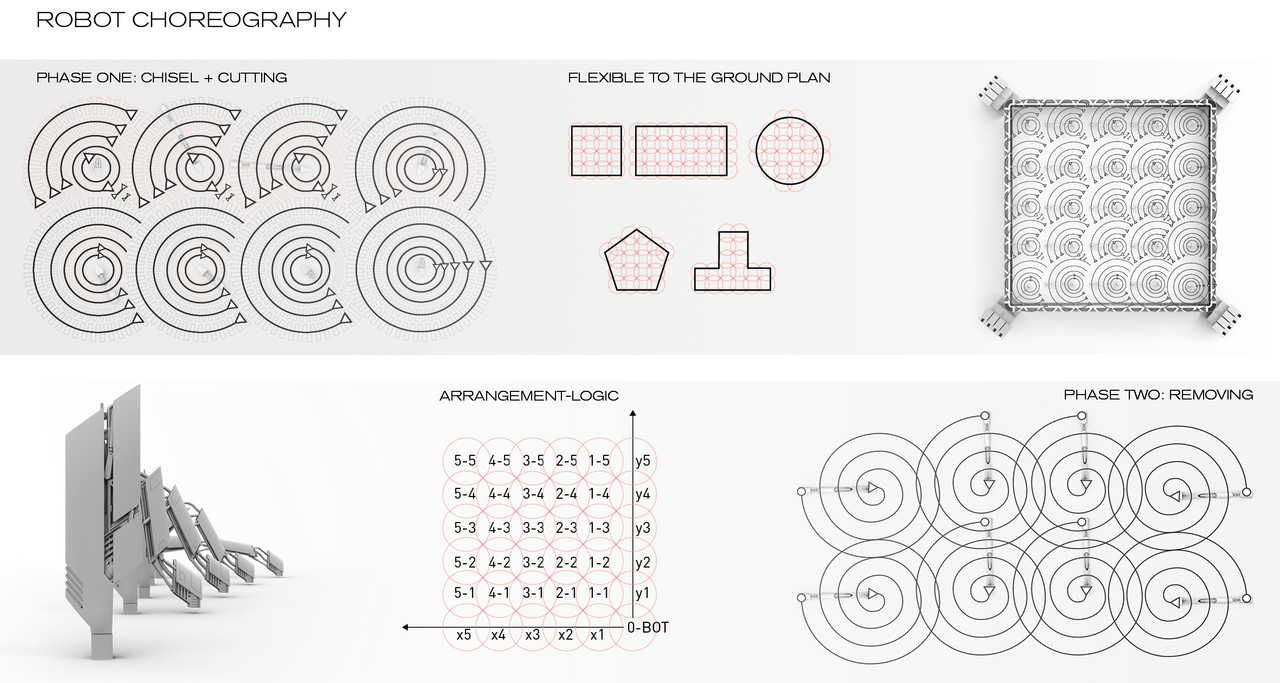 A very complex part of the project is the swarm-cooperation of the robots. Every robot-unit processes its own sector. The upper part of the building-cutter with its arm and tool-head moves in a two dimensional way, performing circular and sprial movements. The lower two parts work in a vertical direction. The result is a cylindrical space which every robot crushes on its way through the building. These cylindrical volumes overlap into the surrounding others, so that there is no room left out. These overlapping areas only have to be processed by one robot. This shows that only one cutter has to perform full circulations, this is the 0-BOT, the otheres in x and y direction have upwards counting numbers like x1, y1, x2, y2...The machines between this two axes have different discriptions, for example the first one in diagonal direction from the 0-BOT is named 1-1. This shows the correct position to workers and engineers. The first number discribes the x-position, the secound one the position in y-direction. (graphic middle above) 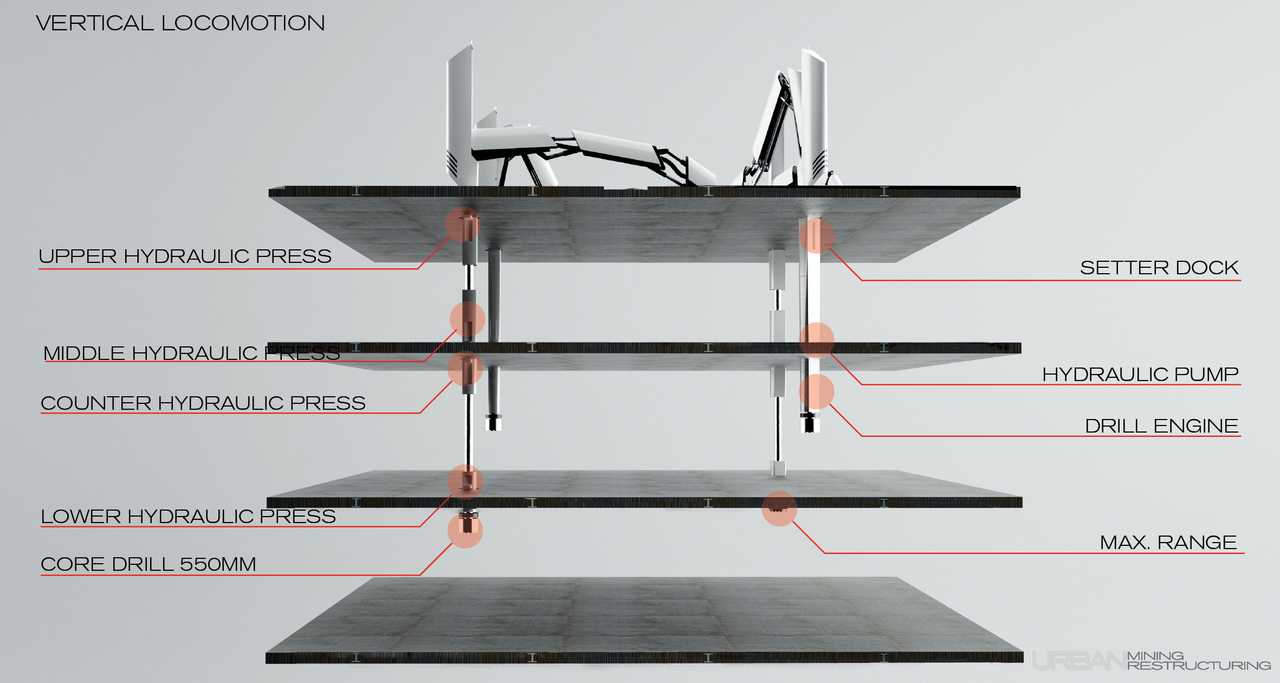 The system consits of four main-hardware-components. Building-Cutter, Setter, Protection-X-Frame and Shredder-Sorter. It is my special concern to make the process visual to the people, showing that something realy good is happening. Therefore I choose a strong and slightly transparent material to span the sytem. This aluminized fabric gives an aesthetic architectural look from outside the sytem. Down in the Streets, the sytem is represented by the shredder with its large visual-windows, through which the people can see the sorted raw materials. 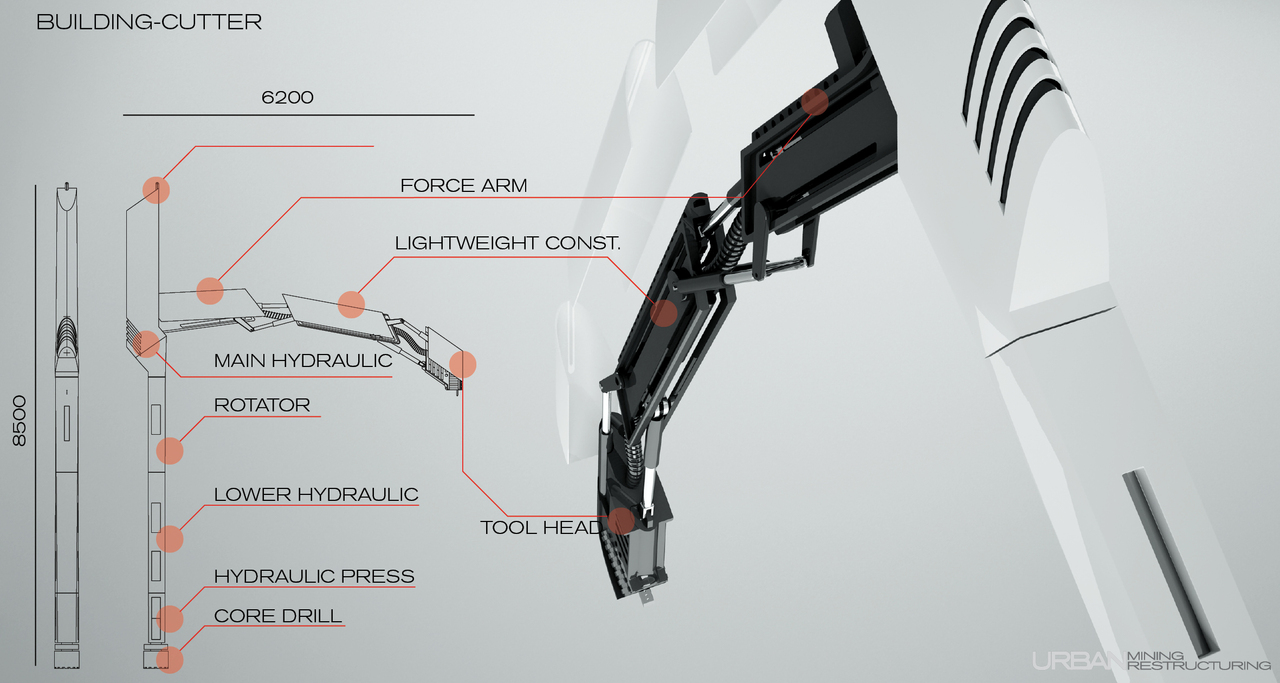 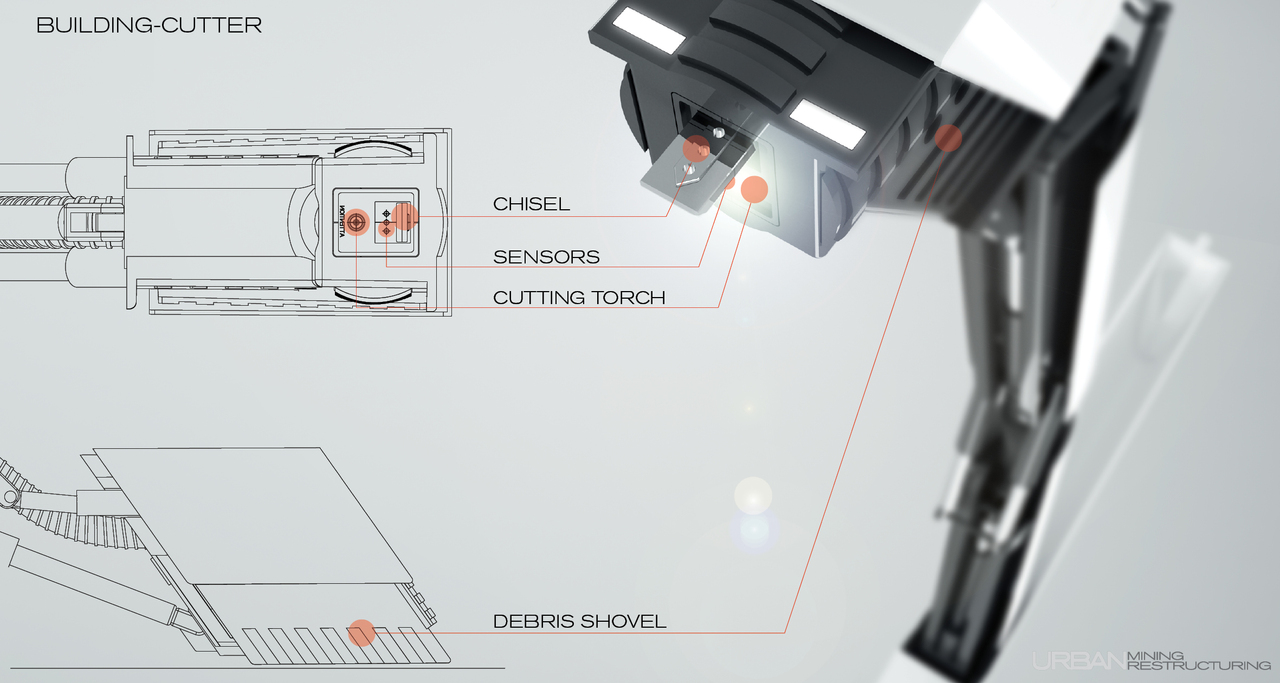 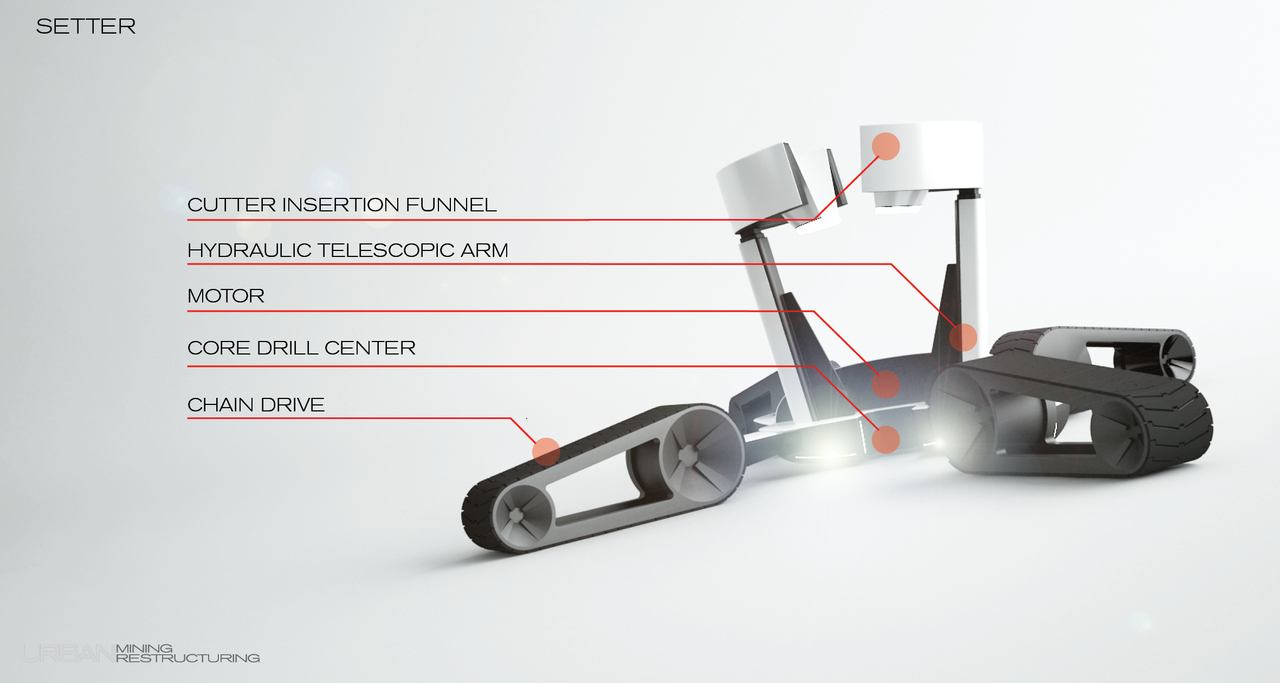 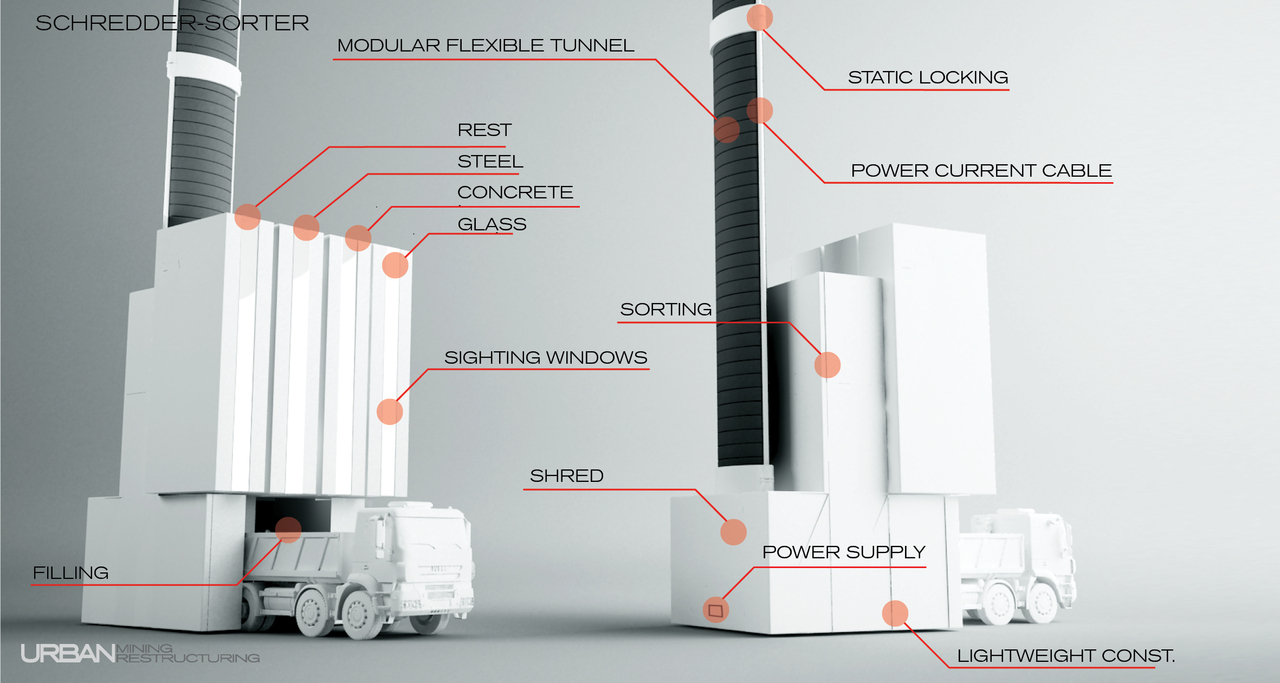 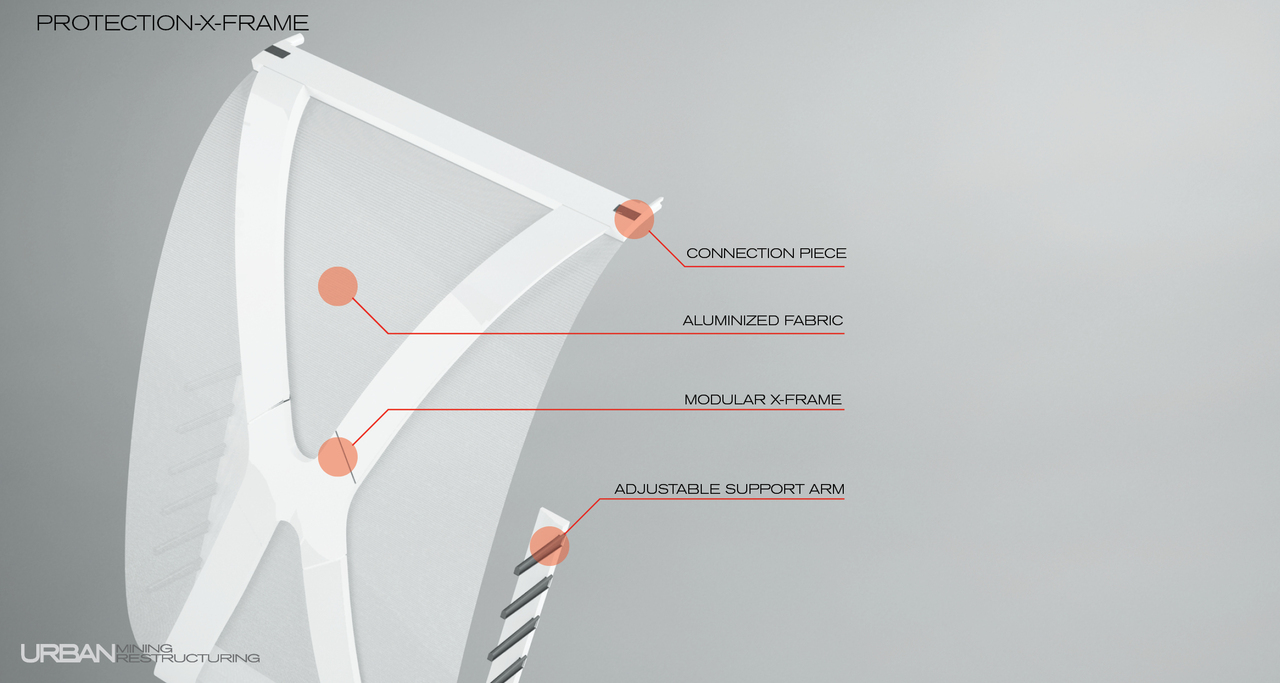 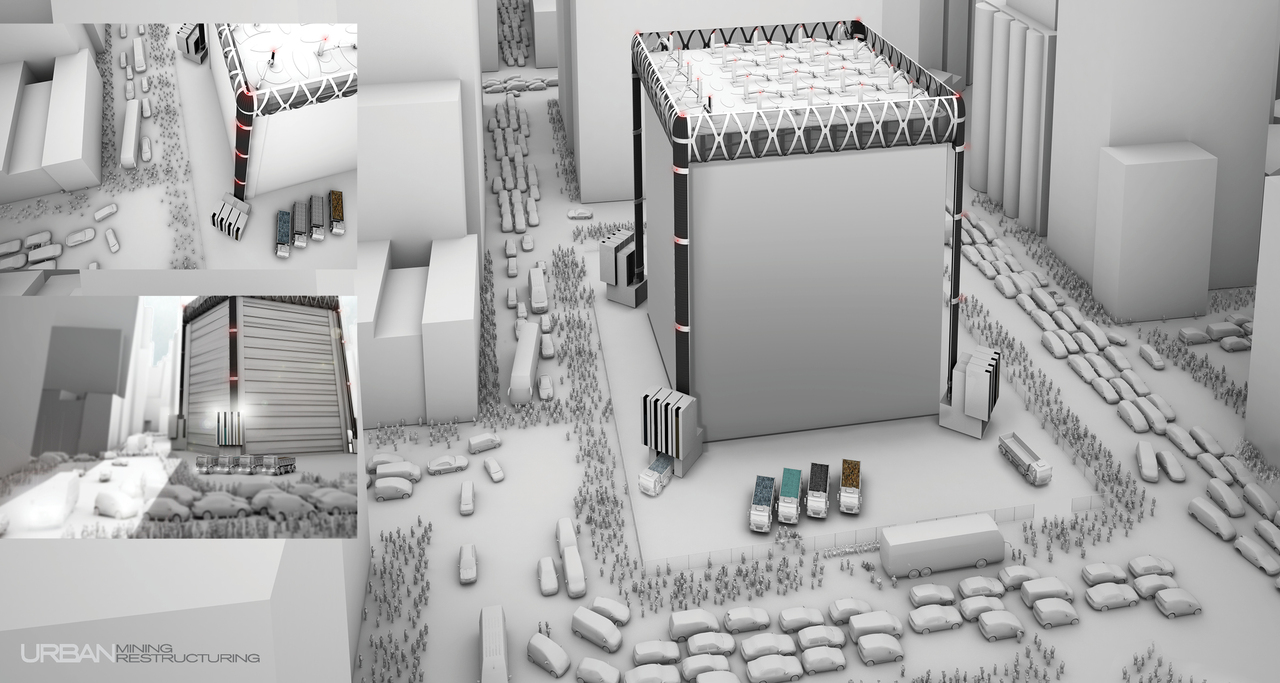 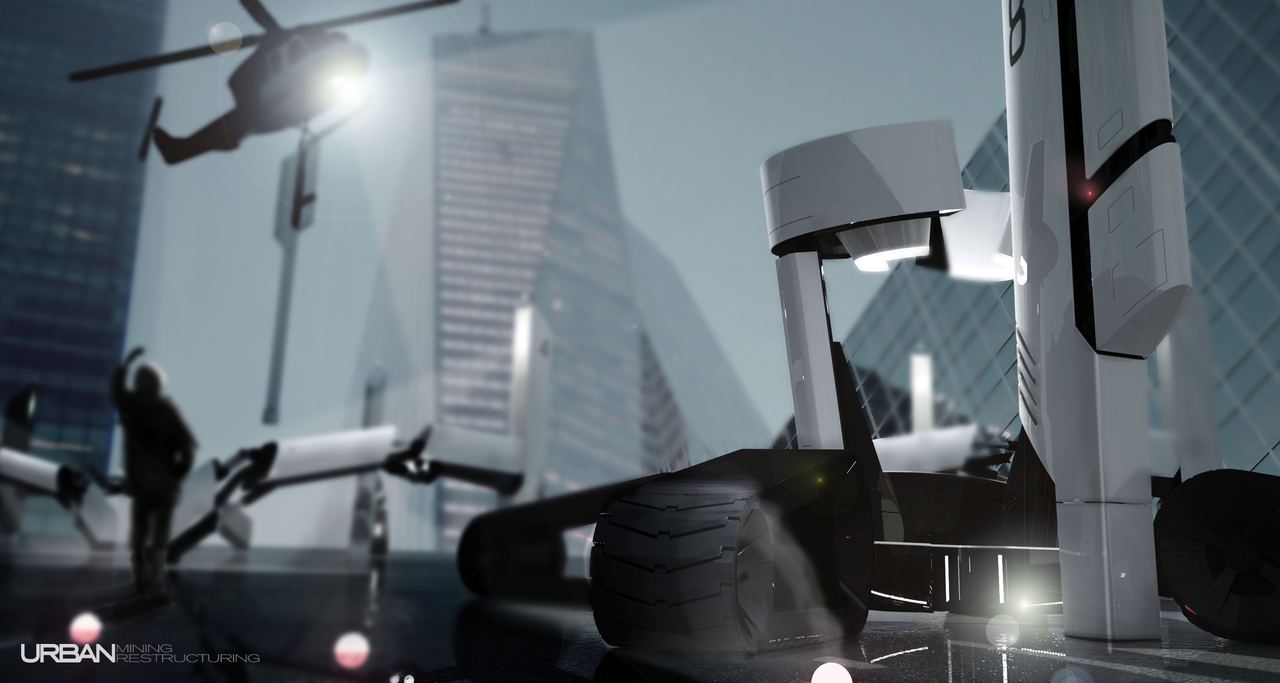 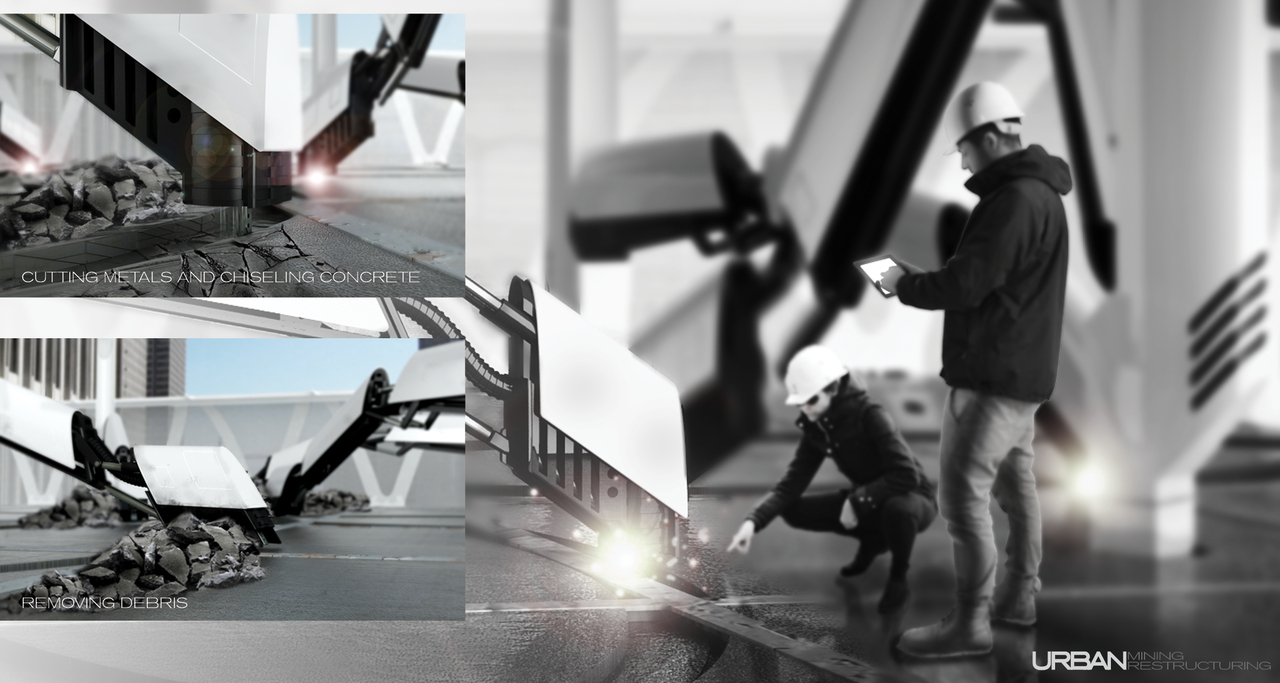 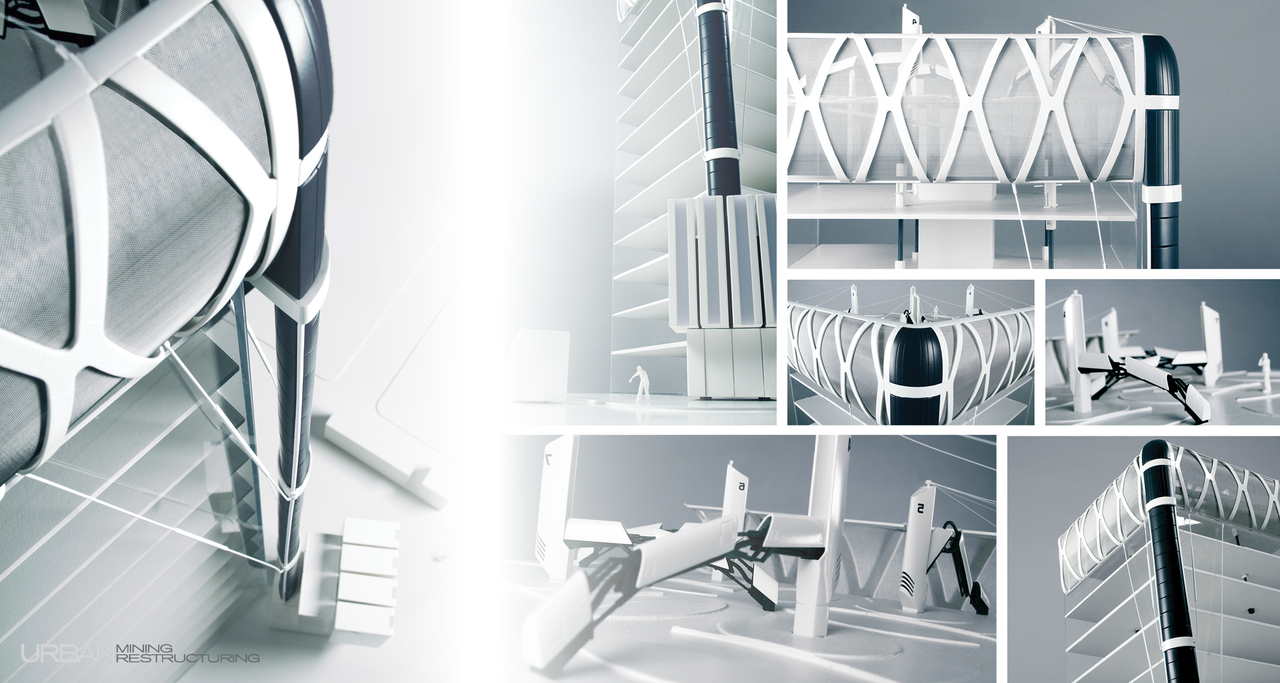 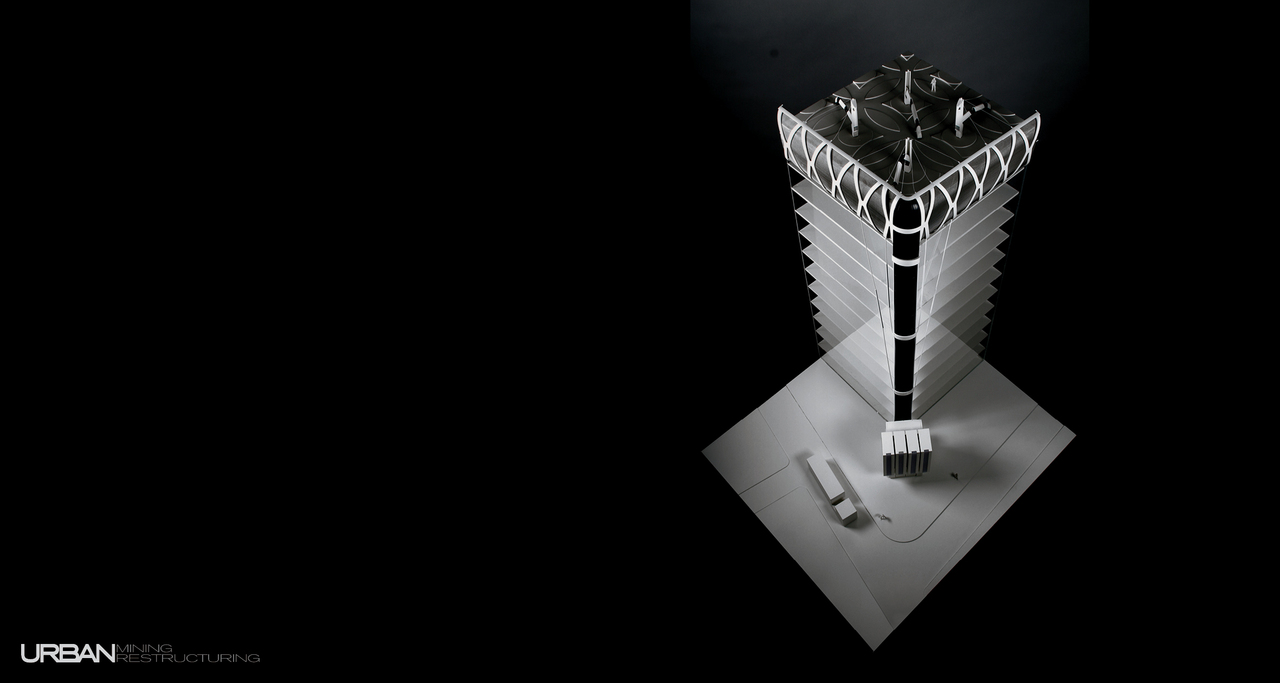